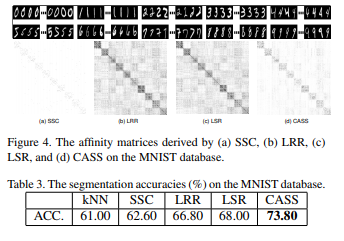 This paper studies the subspace segmentation problem. Given a set of data points drawn from a union of subspaces, the goal is to partition them into their underlying subspaces they were drawn from. The spectral clustering method is used as the framework. It requires to find an affinity matrix which is close to block diagonal, with nonzero entries corresponding to the data point pairs from the same subspace. In this work,we argue that both sparsity and the grouping effect are important for subspace egmentation. A sparse affinity matrix tends to be block diagonal, with less connections between data points from different subspaces. The grouping effect ensures that the highly corrected data which are usually from the same subspace can be grouped together. Sparse Subspace Clustering (SSC), by using 1-minimization, encourages sparsity for data selection, but it lacks of the grouping effect. On the contrary, Low-Rank Representation (LRR), by rank minimization, and Least Squares Regression (LSR), by 2-regularization, exhibit strong grouping effect, but they are short in subset selection. Thus the obtained affinity matrix is usually very sparse by SSC, yet very dense by LRR and LSR. In this work, we propose the Correlation Adaptive Subspace Segmentation (CASS) method by using trace Lasso. CASS is a data correlation dependent method which simultaneously performs automatic data selection and groups correlated data together. It can be regarded as a method which adaptively balances SSC and LSR. Both theoretical and experimental results show the effectiveness of CASS.